March 09, 2021
Carcharoth (C630776-B) was invaded in the early hours of 1089.134 (Imperial) by the the People's Supremacy's crack 35th Drop Ranger Battalion. In accord with the People's Supremacy doctrine, numerous psionic agents were infiltrated into the governmental and military structure months and years in advance. However, President Rica Breson, aware of the People's invasions of Jora and Uryuom, had taken some measures to protect the government. Widespread use of psionic-shields and rigorous recruitment of loyal psions provided a thin line of defense.

In this case, it was enough to allow Breson and the members of her cabinet to evade capture in the openings hours of the invasion. Nonetheless, the People's Army and Navy smashed the Carcharoth defense forces. Remnants of the army now form the nucleus of the Carcharoth Freedom Army (CFA), the primary resistance movement on Carcharoth.

Breson and her cabinet found refuge in Blerreon (B547524-7) in the Piah subsection. Blerreon's hosting of the Carcharoth government-in-exile has put Blerreon as a likely next target of the People's Supremacy expansionist policies.

Carcharoth itself is an inhospitable planet. Tolea, a moon of Cenzyria, seems a far more likely planet for colonization.

However, Carcharoth is rich in lithium and ytterbium. The value of these finds makes adopting to the thin but standard atmosphere and crushing heat worth it. The major in-system trade is water hauling. While Carcharoth has a number of massive solar stills, the volume produced is far less than needed. Hence, a number of companies transverse the space lanes between Carcharoth and Tolea, hauling water to provide to the citizens of Carcharoth. 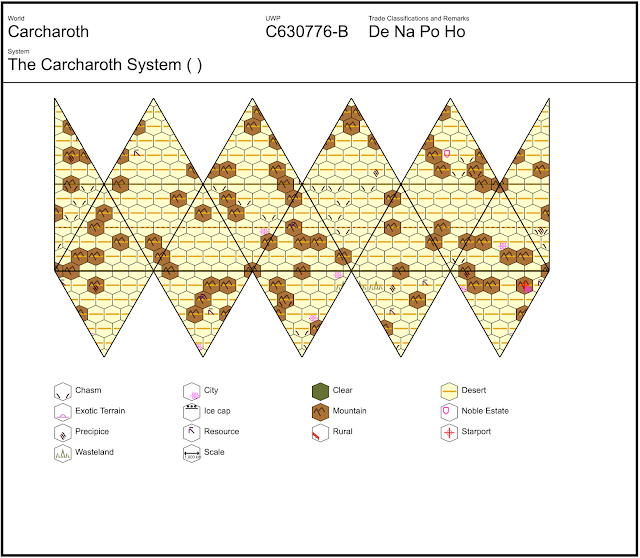 The resistance is not as monolithic as the People's Supremacy makes out. While the CFA is the primary group, numerous others exist as well. Additionally, the People's Supremacy have removed most of its military and outsourced holding and enforcing its laws on the planet to mercenary groups, the largest of which has as major stakeholders top government officials from the People's Supremacy.
No one expects the war to end soon, but the People's Supremacy--for now--possess the mines and processing facilities along with the water supply. Whether Carcharoth can free itself is uncertain, though the government-in-exile and CFA believe it is possible.
Rumors persist that covert Zhodani Consulate assistance to the resistance is present planetside with trainers, psionic specialists, and even combat troops. The Consulate, however, remains firm that no Zhodani military personnel are present. They do not, however, deny that many former Zhodani military personnel may have volunteered their services to the resistance.

Popular posts from this blog 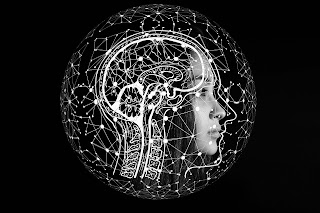 Image by  Gerd Altmann  from  Pixabay   From the History of the Harem Sector in Foreven by Dr. Hatishiv Logius Once a Zhodani aligned state, even the Zhodani Consulate has distanced itself since the People’s Revolutionary Party seized power in a hard coup in 1082 (Imperial). The genesis of the People’s Supremacy was a growing perception that those empowered with psionic abilities were innately better than non-psionic enabled people. While largely inline with Zhodani philosophy (reference the position of the proles), Minister Andyr Fualiz positioned the then People’s Party--a vaguely communist-anarchist oriented group--into a more aggressive, psion superiority party. When slapped with the term supremacist movement, Fualiz embraced the term. In the early hours of day 1082.53 (Imperial), Fualiz and Admiral Habix Villous (a secret psion who had for years ensured the rise of fellow psions to high military ranks) seized the capital city, Nolar, and secured the system with cruisers under Vi
Read more 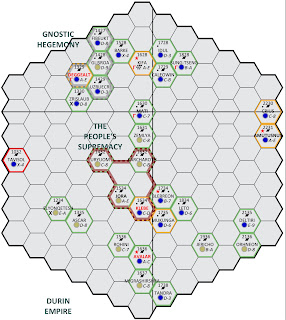 For the Goodwill Tour, I rolled up randomly nearly every planet in the Foreven sector. I left untouched the few canonical worlds, but everything else was random with one exception. A campaign idea revolves around the planet Tavisol, which I purposely designed and also wanted a bit of distance from other system. Reasons. The rest, though, I went random. I was toying with a few ideas for running my solo game, and I kept to the area around Tavisol. I had not fleshed out any of the systems beyond the basic rolls, and the few multi system polities I left ready to be discovered. Hence, the People’s Supremacy seemed like a potentially interesting setting. A totalitarian state with a charismatic oligarchy centered on Klebe (C246ACD-D). I’ve started to flesh out this government, which I’ll share in the near future. I also determined to set my solo game in Carcharoth (C630776-B), a captive government under the thumb of the People’s Supremacy. My solo game will focus on a band of rebels. I’m goin
Read more